Sundar Pichai has become a house hold name in India in the past one year when he became CEO of Google, the giant company. If you are keen to know about his life and past, scrolling down would do the needful. The genius was born on July 12, 1972 in a middle-class family of Chennai. He completed his schooling from Padma Seshadri Bala Bhavan, Nungambakkam where he excelled in academics. Pichai’s father worked as an electric engineer, the reason for his tech interest. According to his father, the younger Pichai was always curious about his father’s work and enquired about it. Being a bright student, he got into IIT, Kharagpur easily and later on flew to Stanford University to complete his M.S in Material Sciences and Engineering.  It was in IIT that he met the love of his life, Anjali with whom he is happily married now with two children, a boy and a girl. When he first landed the foreign country, it was not much pleasant in the beginning as he felt homesickness and the cost of living was too high for him to adjust. Since the 5’10 tall Pichai belonged to the middle-class family, his parents have sacrificed a lot to make him what he is today
He started his career with McKinsey & Company before he joined Google in 2004 when the brand was about to launch Gmail. Sundar was mainly responsible for handling the software products such as chrome OS and Google chrome. It was his idea that Google should host its own browser. Next, the mastermind came up with the Google drive, that is supposed to be an important contribution. Moreover, he was involved in the development of applications like Google map and many other additions to the Gmail. 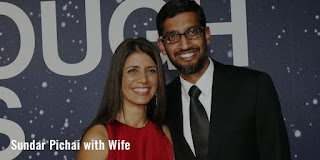 The 43-year-old has offered a great help to the laptop users by developing the chrome operating system that allows the data to be stored on cloud instead of the device. He was appointed as the CEO of the Google on 10 august, 2015 owing to the great contributions and intellectual brain. He was the first nonwhite CEO of the company.
Sundar was received with open arms when he visited India after creating history. In one of the conferences, he shared his love for cricket and Deepika Padukone being her favorite Bollywood actress.


The CEO of Google was in great demand and many big companies like Twitter and Microsoft were after him. Twitter wanted him to work as a Vice president whereas Microsoft was offering him the position of CEO.  Sundar Pichai has gained wide recognition but has a heavy responsibility to carry in terms of user data.  The IITian owns a house in Brooklyn that he purchased for $6.8 million in 2015. Being one of the most influential men in the world, his estimated cost is expected to be around $150 million.
Posted by Aladinn Health at 12:04 AM